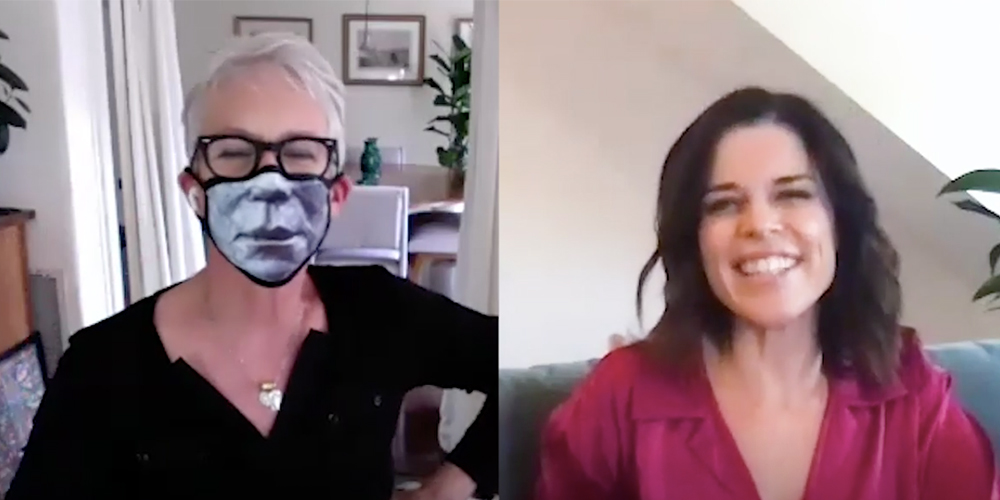 The Laurie Strode-Sidney Prescott horror movie crossover of your dreams happened over a Zoom call.

Variety convened the stars behind the iconic films “Halloween” and “Scream” — Jamie Lee Curtis and Neve Campbell — for a legends-only talk about their rare positions in Hollywood as franchise leaders and to compare notes on their decades rebooting and revitalizing their slasher films.

They are, on the whole, thankful for the time they spent smeared with what they call “sticky stage blood,” as the genre kick-started both their careers. “Two really grateful scream queens here,” Curtis says, after previously showing off her Michael Myers coronavirus mask.

However, they’re certainly not afraid to discuss the sexism they endured in terms of compensation in spite of playing the hero for so many years.

Both the “Scream” and “Halloween” franchises generated more than $600 million at the box office, launching multiple sequels and solidifying Ghostface’s and Meyers’ places as top-shelf villains. While that brought in major cash for the local Spirit Halloween store and took over prominent space in pop culture, how did their female leads fare?

“The truth of the matter is, I didn’t really make much money off of the horror movies,” Curtis says. “Look, we’re actors, so we already make more money based on the little work we do. It’s hard to ever say, ‘I didn’t make a lot of money.’ Tell that to a teacher or nurse. But as a young actress, I did not. I did not have ownership in the movies. There was no profit participation. There was no back end. … There was no large amount of money made.”

As such, Curtis saw a disconnect between the films’ success and her own. “Obviously someone was making a lot of money — it was not me,” she says, “and it was only in the latter years — the ‘H2O,’ the 2018 ‘Halloween,’ which, by the way, we made for scale.”

Campbell had the same experience, saying that on “Scream 3” she “did all right but no back end. There’s always the promise of back end. And then, of course, it’s drowned in publicity and costs and all the reasons they say, ‘Oh, actually no, we didn’t make the amount of money that we’re claiming we made in all the press, so that we don’t have to give you that,’ unfortunately. It was the Weinsteins.”

The struggle for equal compensation for starring women, like many battles in Hollywood, is a systemic issue.

“The industry has no problem when a man makes millions of dollars on something that’s a franchise,” says Curtis. “We as a society go, ‘Good on ya!’ But then if a woman says, ‘Well, I would like that same piece of the pie,’ I think people would think you’re being greedy, or you’re not being grateful. As if somehow we as women have to be just grateful for the opportunity. Which we already explained we are!”

Campbell agrees, saying simply, “We would like to make equal.” Adds Curtis: “We have both worked for many, many, many years to continue our careers. At some point it’s OK to say, ‘No, I’m going to get paid this or I’m not going to be able to play in your sandbox.’”

Despite their mutual aversion to the medium (Campbell was scarred by a sleepover screening of “The Changeling,” and Curtis had the same experience watching “The Exorcist” for her 15th birthday), both hold horror in the highest regard. “They did great things for my career, great things for my life. I had fun on them,” says Campbell of her “Scream” films.

Neither actor could foresee the ripple effect these genre-pioneering movies would have on the films that followed. It’s a legacy that has stretched for decades, with both stars recently returning to their characters. Curtis revived Strode for the 2018 Blumhouse “Halloween” sequel (with two more films to follow), and Campbell will return to Woodsboro this year for “Scream 5.”

“[On] the first [film], none of us were anybody,” says Campbell. “Courteney Cox was in the first year of ‘Friends.’ I was in the first year of ‘Party of Five.’ Matthew Lillard, David Arquette, Jamie Kennedy, Rose McGowan. All of us got these careers afterward. We were just young and innocent. I remember sitting around a bonfire and thinking, ‘Do you think if people see this movie that there might be a Halloween costume? Nah!’”

Curtis says her casting in the 1978 “Halloween” was low pressure: “We had nothing to lose; we didn’t know that we had anything to gain. We were just so happy to have this gig. The original ‘Halloween’ was made in 17 days with like 12 people. … Everybody was young. There was magic happening and none of us, not one person — I would dare say even John Carpenter and Debra Hill — I don’t think anybody knew.”