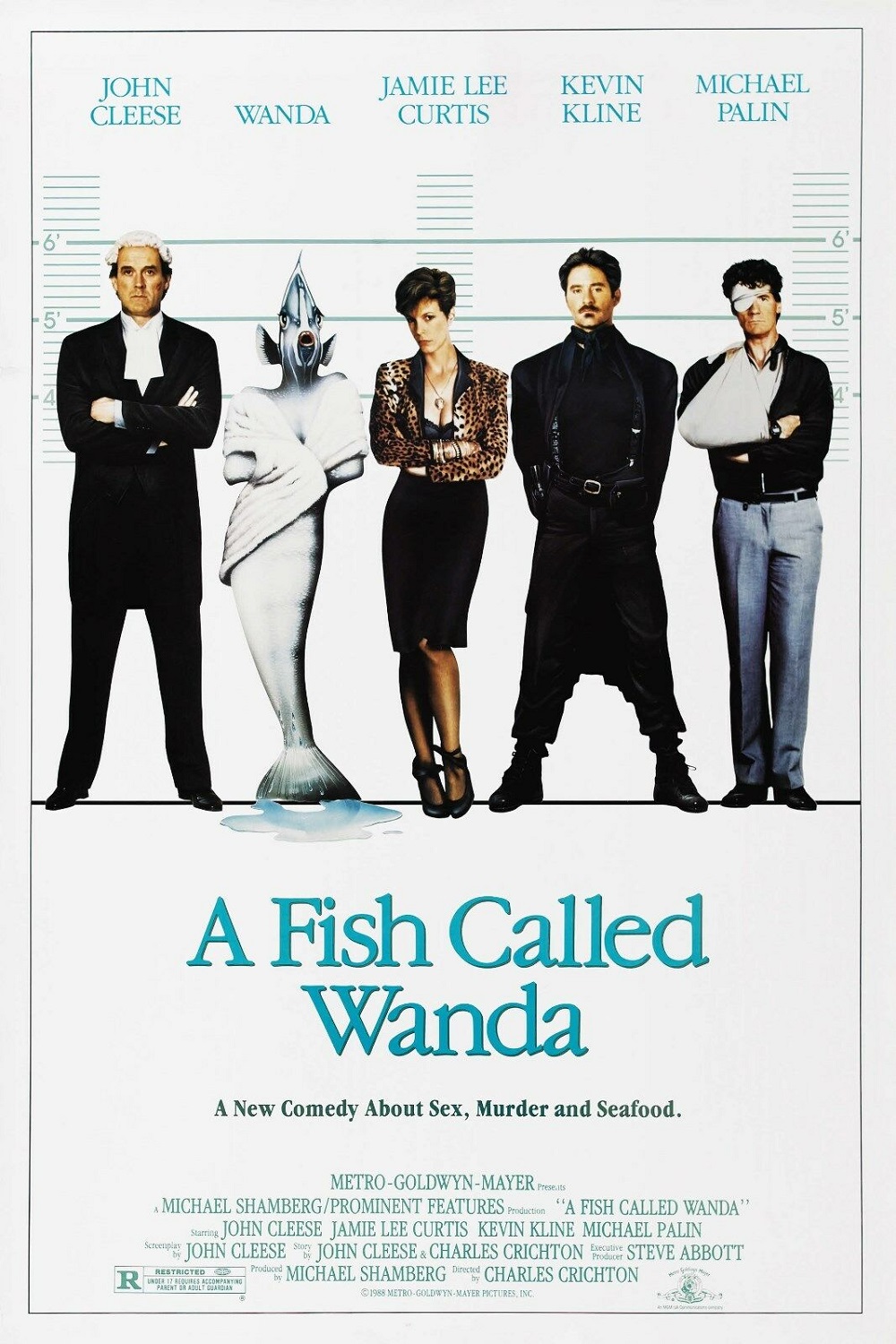 London-based gangster George Thomason plans a jewel heist with his right-hand man, Ken Pile, an animal lover with a stutter. They bring in two Americans: con artist Wanda Gershwitz and weapons expert Otto West, an ignorant and mean-spirited anglophobe. Wanda and Otto are lovers, but they hide this from George and Ken, pretending to be siblings, so Wanda can work her charms on them. The heist is successful and the gang escapes with a large sum in diamonds, which they hide in an old safe. Soon afterward, Wanda and Otto betray George to the police and he is arrested. They return to collect the diamonds, with Wanda planning to double-cross Otto as well, but find the safe is empty. In Ken’s fish tank, Wanda discovers the key to a safe deposit box where George has moved the diamonds and hides it in her locket.

Wanda decides to seduce George’s barrister, Archie Leach, in hopes of learning the location of the diamonds. Archie is in a loveless marriage and quickly falls for Wanda. Otto becomes jealous, and his interference causes Wanda and Archie’s liaisons to go disastrously wrong. Wanda accidentally leaves her pendant at Archie’s house, and his wife, Wendy, mistakes it for a gift for her, assuming that the W on it stands for Wendy. Wanda demands that Archie retrieve the pendant, and after failing to convince Wendy to give it up, he ends up faking a robbery at his own home in order to explain its disappearance. Otto arrives at the house to apologize to Archie for earlier insults and interrupts the robbery, knocking the presumed burglar unconscious before he realises that it is Archie who is robbing his own home. Archie returns the pendant to Wanda at their next romantic meeting, but it is interrupted and he subsequently telephones her to call off their affair. Otto arrives at the house again to apologise. Wendy overhears their subsequent conversation and finds out that Archie is cheating on her.

George asks Ken to kill the Crown’s only eyewitness to the robbery, the elderly Eileen Coady, who owns three small dogs. Ken repeatedly tries to kill her, but each time accidentally kills one of the dogs instead, causing him great distress. The last dog’s death gives the woman a fatal heart attack, making Ken successful at last. With no witness, George seems poised to be released. He gives instructions to Ken, revealing the location of the diamonds. When Otto learns that Ken knows the location, he tries to force Ken to reveal it by eating Ken’s various pet fish, leaving Ken’s favorite, named Wanda, until last. Ken reveals that the diamonds are at the Cathcart Towers Hotel near Heathrow Airport, but doesn’t know Wanda already took the key until she informs Otto.

With Otto’s knowledge and Wanda’s key, the two want George to remain in jail. At his trial, Wanda, as a defense witness, unexpectedly gives evidence against him. Archie is stunned by her statements and flubs his questioning, inadvertently calling her “darling”. Wendy, watching from the public gallery, declares their marriage over.

With his career and marriage ruined, Archie resolves to cut his losses, steal the loot himself and flee to South America. Promising less jail time, Archie asks George about the diamonds and learns of Otto and Wanda’s complicity and that Ken knows their location. Archie sees Wanda fleeing the court and they race to Ken’s flat together. As they arrive, Otto steals Archie’s car, taking Wanda with him. While Ken stutters uncontrollably, Archie painstakingly gets him to reveal the location of the safety deposit box. Ken is never able to fully say the name of the location, but he ultimately writes the location out for a frustrated Archie. They then set out for Heathrow on Ken’s moped.

Otto and Wanda recover the diamonds, but Wanda double-crosses Otto and leaves him unconscious in a broom cupboard at Heathrow. She reluctantly boards her flight to Rio de Janeiro without Archie. Otto recovers, steals a boarding pass, and makes his way to the tarmac, where he is confronted by Archie. Otto is about to kill Archie, but Archie stalls him by taunting Otto about America’s defeat in Vietnam. Ken arrives, driving a steamroller, seeking vengeance for his fish. Otto finds he has stepped in wet concrete and cannot move; he is run over, but survives. Archie and Wanda board the plane while Otto, clinging to the window outside, curses them until he is blown off during takeoff.

• A tale of murder, lust, greed, revenge, and seafood.
• A New Comedy About Sex, Murder and Seafood.

→ The role of Wanda Gershwitz was written specifically for Jamie Lee Curtis.
→ Jamie Lee Curtis has pointed out that in several shots you can see her breaking character and laughing. One notable example is when Wanda Gershwitz and Otto West have their argument at the dockside (“To call you stupid would be an insult to stupid people!”).
→ Jamie Lee Curtis was initially skeptical when John Cleese contacted her to offer the role of Wanda. She was convinced he really wanted to meet her husband Christopher Guest, whose film This Is Spinal Tap had just been released.