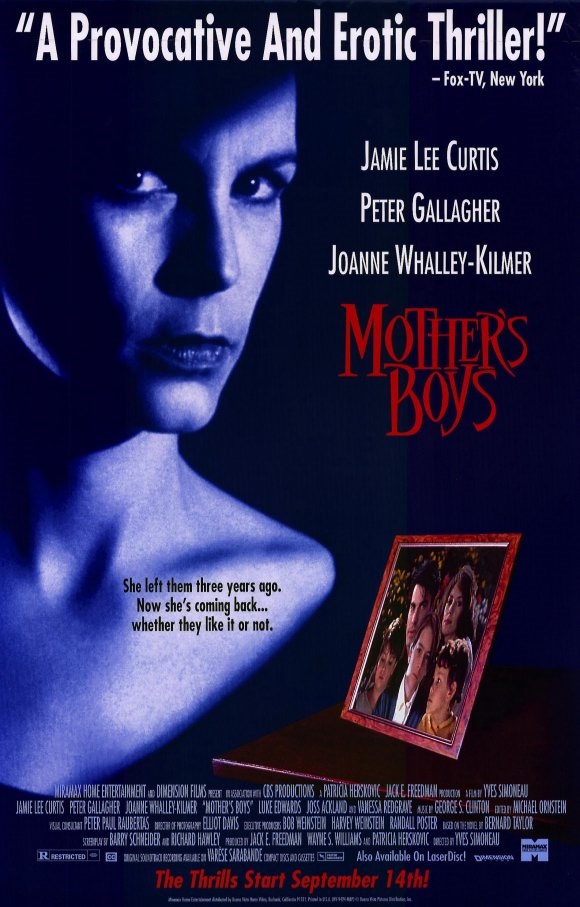 Sexy but unstable wife and mother Jude (Jamie Lee Curtis) walked out on her family three years ago. Now, just as suddenly, she is back. But her husband, Robert (Peter Gallagher), has fallen in love with Callie (Joanne Whalley-Kilmer), an assistant principal at his sons' school. He asks Jude for a divorce. She responds by trying to turn her three boys against Callie, then by slashing herself and blaming her rival and finally by drawing her 12-year-old, Kes (Luke Edwards), into a murderous plot.

Jude Madigan (Curtis) suddenly and inexplicably leaves her husband, Robert (Gallagher), and three sons. Three years later, when Robert finally files for divorce, Jude returns and tries to reclaim her former life. Robert refuses and insists on the divorce. Jude does not accept Robert’s decision. She tries, unsuccessfully, to seduce him and harasses Robert’s new girlfriend, Callie (Whalley). Eventually, Jude manipulates and convinces her eldest son, Kes (Luke Edwards), that Callie is the only person standing in the way of their reunited family.

Influenced by Jude, Kes details a plan to his two brothers, Michael and Ben (Colin Ward and Joey Zimmerman), to scare off Callie, convincing them that it is just a game. As the boys debate the plan, Jude’s estranged mother, Lydia (Redgrave), overhears and confronts Kes and threatens to tell their father. Kes tries unsuccessfully to convince his grandmother that it was just a “game” and tries to stop her from calling his father. A brief struggle ensues and Lydia accidentally falls down the stairs.

While in the hospital, Lydia tells Jude she is not about to let her go through with her plans. She also tells Jude that her father “committed a great sin” against Jude, suggesting that Jude’s father might have been molesting her from a young age (which might explain Jude’s current erratic and sociopathic behavior). Lydia then goes on to say that she had planned on taking Jude away from her father (viewers are led to believe that this is the reason behind Jude’s father’s suicide). In a fit of rage, Jude then tries to murder her mother by asphyxiation but is interrupted by a nurse, Jude then flees the hospital. In a state of grief, Jude vandalizes her apartment by smashing the windows, furniture, and fixtures.

Meanwhile, the boys, under the guise of playing the game, handcuff Callie and put her on “trial” for destroying their family. They tie her to a chair but when Ben cuts himself on a broken glass, Callie convinces Michael to free her before his brother dies. She runs with him in an attempt to find a hospital.

Kes and Michael get in Callie’s car and chase them, but the brakes have been cut by Jude and they go over a cliff, leaving them perched precariously on a tree on the side of the cliff. Callie manages to rescue Michael, but as she tries to rescue Kes, she slips and is left dangling from the car. Jude rushes to “help” by grabbing Callie’s hand from Kes. Jude intentionally lets go of Callie’s hand, who still manages to hang onto the car with her other hand. However, Jude loses her balance and falls to her death.

The film ends with Robert’s emotional embrace of Kes, who is very shaken after having a nightmare of Jude coming back from the dead. Callie is right by Robert’s side, comforting them both.

→ The first time Jamie Lee Curtis has played a villain.
→ Jamie Lee Curtis and Peter Gallagher would go on to appear on the TV series New Girl.
→ The poster for this movie appears during the “Everybody’s a Suspect!” scene between Jamie Kennedy and Matthew Lillard in the 1996 film Scream.