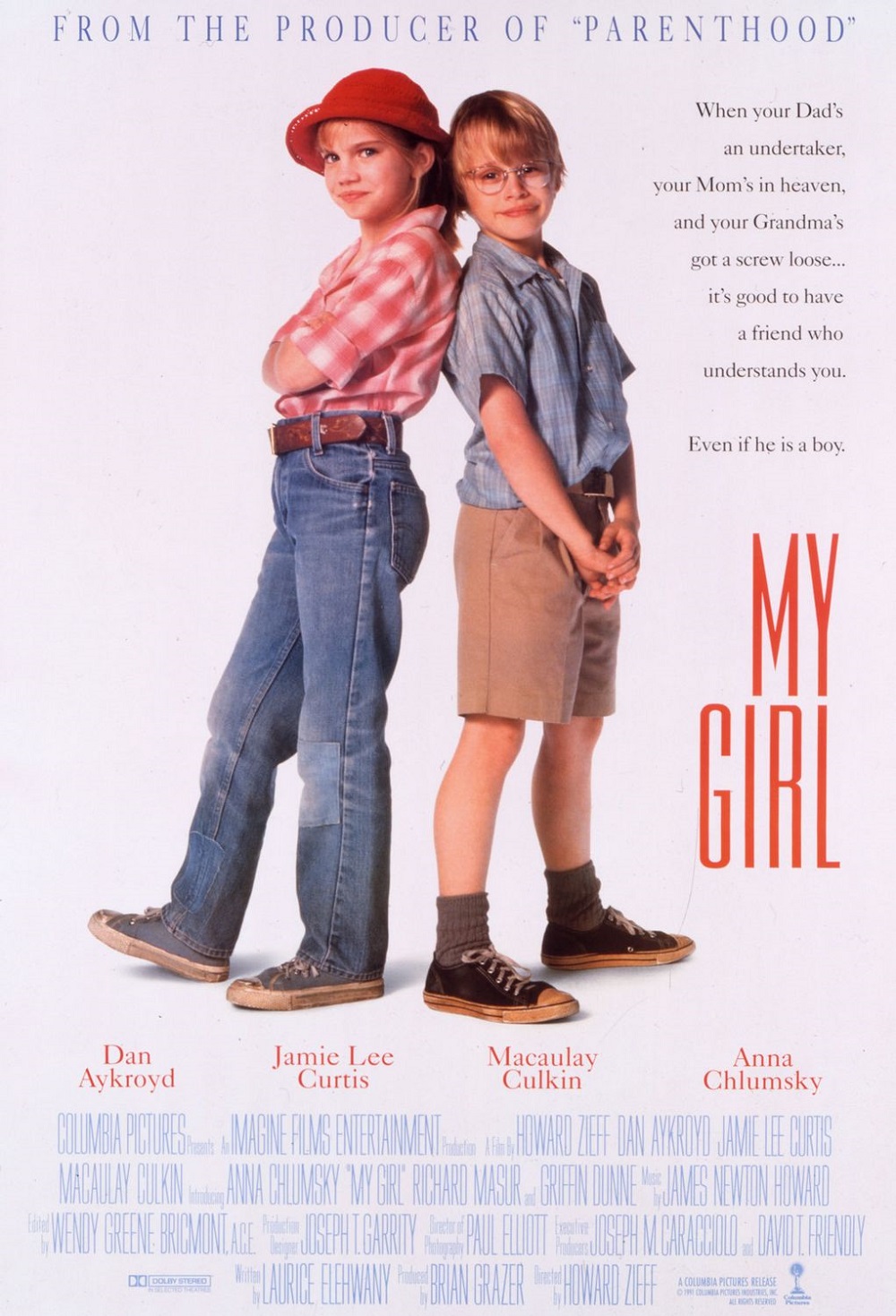 Tomboy Vada Sultenfuss (Anna Chlumsky) has good reason to be morbid: her mother died giving birth to her, and her father (Dan Aykroyd) operates a funeral service out of their home. The other kids think she's a freak, and it certainly doesn't help that her best friend, Thomas J. Sennett (Macaulay Culkin), is a boy. To make matters worse, Vada is desperately in love with her English teacher, Mr. Bixler (Griffin Dunne). What's an 11-year-old girl to do?

Vada Sultenfuss is an 11-year-old girl living in Madison, Pennsylvania in the summer of 1972. Her father, Harry Sultenfuss, operates the town’s funeral parlor, which also serves as their home. Vada’s upbringing leads her to suffer from hypochondria and develop an obsession with death, and her father fails to understand it. Also living with them is “Gramoo”, Vada’s paternal grandmother, whose recent mind wandering accentuates Vada’s worries. Her uncle Phil lives nearby and frequently helps the family.

Vada hangs out with Thomas J. Sennett, an unpopular boy her age who is allergic to “everything”. Other girls tease the two, thinking they are more than just friends. Thomas J. often accompanies Vada when she visits the doctor, who assures her that she is not sick. He is quite nice to her, although she is often unkind in return.

Vada’s summer begins well. She befriends Shelly DeVoto, the new makeup artist at the funeral parlor, who provides her with some much needed guidance. She also develops a crush on Mr. Bixler, her fifth-grade school teacher, and hears about an adult poetry writing class he is teaching. Wondering how to pay for the class, Vada schemes after seeing enough money in a cookie jar in Shelly’s camper. During her first class, when advised to write about what is in her soul, Vada fears that she killed her mother, who died two days after giving birth to her.

When Harry and Shelly start dating, Vada’s attitude towards Shelly changes. One night, Vada follows Harry and Shelly to a bingo game and brings Thomas J. along to disrupt it. On the Fourth of July, when Shelly’s ex-husband Danny shows up, Vada hopes that he will take Shelly back, but to no avail.

Following the holiday, and another doctor visit, Vada and Thomas J. spot a beehive in the woods, which Thomas J. knocks down. Vada loses her mood ring in the process, and while the two look for it, the bees swarm and force them to run away. Shortly afterward, Harry invites Vada to a carnival, but she is unenthusiastic to go when he announces Shelly is also coming. Vada becomes distressed when the two announce their engagement there, leading her to contemplate running away.

Later, Vada screams when she discovers she is hemorrhaging. With Harry not around, Shelly politely explains to Vada that she is experiencing her first period. As Vada accepts this happens only to girls, she is unwilling to see Thomas J., who happens to come by shortly afterward. A couple of days later, Vada and Thomas J. sit under a willow tree, wondering what a first kiss feels like, and they share one. After Vada heads home, Thomas J. returns to the woods to search for Vada’s mood ring. Unaware that the beehive he knocked down is still active, he is surrounded and attacked by the bees, and dies as a result.

Harry is left to deliver the tragic news to Vada. Following one more doctor visit, a devastated Vada stays in her bedroom for a full day. Prior to Thomas J.’s funeral, Shelly suggests that Harry console Vada, but he brushes her off. To this, Shelly emotionally urges him to realize the significance of his daughter’s pain. When Vada finally leaves her bedroom and sees Thomas J. in his casket, her grief becomes so strong that she runs away. In tears, she rushes to Mr. Bixler’s house, wanting to stay with him but discovering he is engaged.

Vada continues her grieving on the willow tree, where she and Thomas J. hung out. When Vada returns home, everyone is relieved, including Shelly, whom Vada begins to accept as her future stepmother. Her grief also manages to mend the rift between her and her father, who assures Vada that her mother’s death was not her fault.

Toward the end of summer, Vada and her father see and comfort Mrs. Sennett, who still struggles with her son’s death. She returns Vada’s mood ring, which Thomas J. had found. On the last day of her writing class, Vada reads a poem in memory of her best friend.

• A funny and moving family film!
• When your Dad’s an undertaker, your Mom’s in heaven, and your Grandma’s got a screw loose…it’s good to have a friend who understands you. Even if he is a boy.

→ Jamie Lee Curtis instituted a swear can onset to prevent “trucker talk” (as Dan Aykroyd called it) around the child actors. Aykroyd later said in an interview, “It was $5 for this word and $10 for another word and by end of the movie the kids had about five grand in there.”
→ The MPAA originally gave the movie a PG-13 rating (most likely for the mature elements throughout it). It was changed to PG on appeal.
→ Dan Aykroyd and Jamie Lee Curtis previously worked together in Trading Places. They would later work together in the film’s sequel and Christmas With the Kranks.

♦ The first rule of eye makeup is that you can never wear enough blue eye shadow.