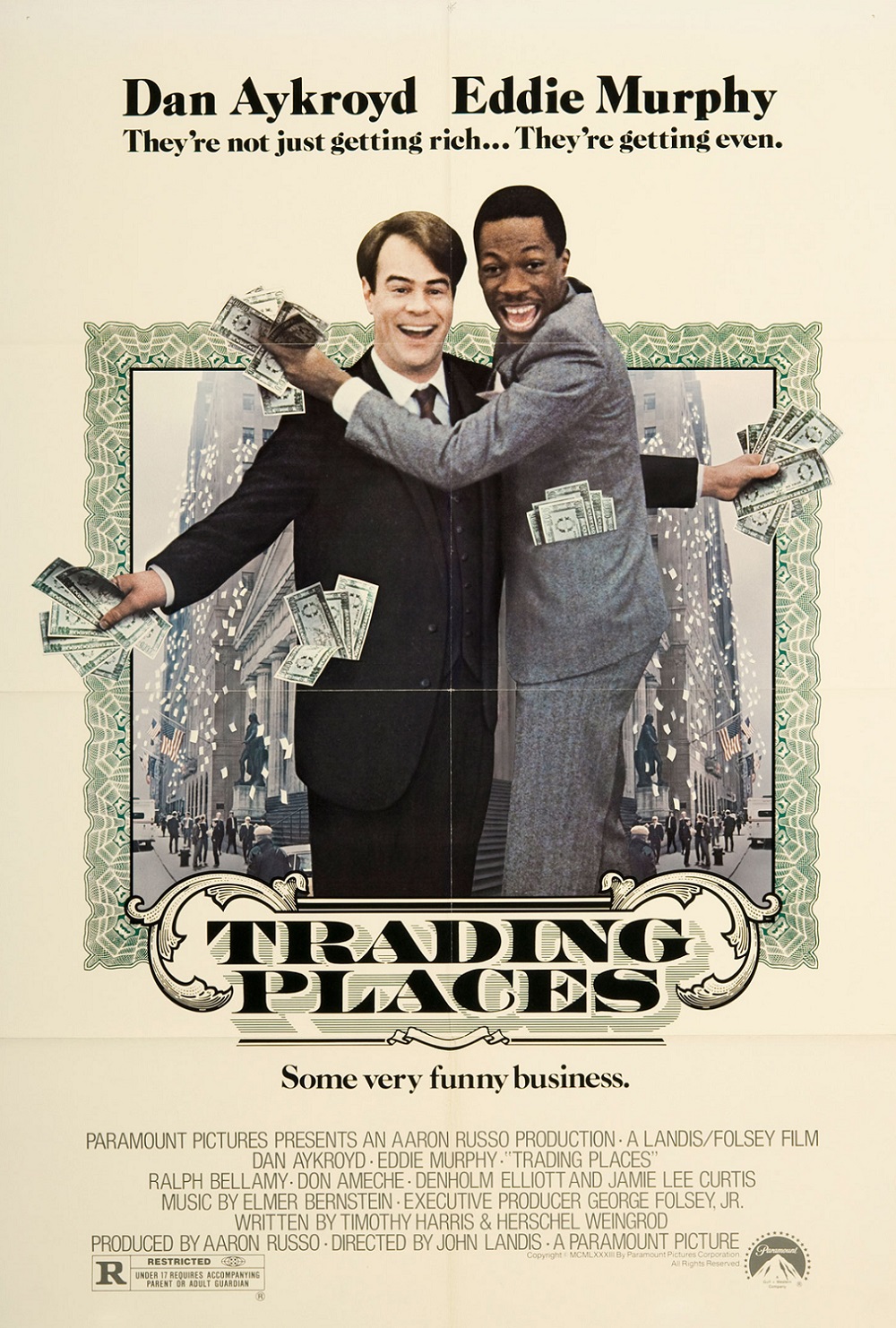 Upper-crust executive Louis Winthorpe III (Dan Aykroyd) and down-and-out hustler Billy Ray Valentine (Eddie Murphy) are the subjects of a bet by successful brokers Mortimer (Don Ameche) and Randolph Duke (Ralph Bellamy). An employee of the Dukes, Winthorpe is framed by the brothers for a crime he didn't commit, with the siblings then installing the street-smart Valentine in his position. When Winthorpe and Valentine uncover the scheme, they set out to turn the tables on the Dukes with the help of street-savvy prostitute Ophelia (Jamie Lee Curtis).

Brothers Randolph and Mortimer Duke own a commodities brokerage firm, Duke & Duke Commodity Brokers, in Philadelphia, Pennsylvania. Holding opposing views on the issue of nature versus nurture, they make a wager and agree to conduct an experiment—switching the lives of two people on opposite sides of the social hierarchy and observing the results. They witness an encounter between their managing director—the well-mannered and educated Louis Winthorpe III, engaged to the Dukes’ grandniece Penelope—and a poor black street hustler named Billy Ray Valentine; Valentine is arrested at Winthorpe’s insistence after the latter assumes he is being robbed. The Dukes decide to use the two men for their experiment.

Winthorpe is framed as a thief, drug dealer and philanderer by Clarence Beeks, a man on the Dukes’ payroll. Winthorpe is fired from Duke & Duke, his bank accounts are frozen, he is denied entry to his Duke-owned home, and he is vilified by Penelope and his friends. He befriends Ophelia, a prostitute who helps him in exchange for a financial reward once he is exonerated. The Dukes post bail for Valentine, install him in Winthorpe’s former job, and grant him use of Winthorpe’s home. Valentine becomes well versed in the business, using his street smarts to achieve success, and begins to act in a well-mannered way.

During the firm’s Christmas party, Winthorpe plants drugs in Valentine’s desk, attempting to frame him, and brandishes a gun to escape. Later, the Dukes discuss their experiment and settle their wager for $1. They plot to return Valentine to the streets, but have no intention of taking back Winthorpe. Valentine overhears the conversation and seeks out Winthorpe, who has attempted suicide by overdosing on pills. Valentine, Ophelia, and Winthorpe’s butler, Coleman, nurse him back to health and inform him of the experiment. Watching a television news broadcast, they learn that Beeks is transporting a secret United States Department of Agriculture (USDA) report on orange crop forecasts. Winthorpe and Valentine recall large payments made to Beeks by the Dukes. They realize the Dukes will obtain the report early to corner the market on frozen concentrated orange juice.

On New Year’s Eve, the four board Beeks’ train in disguise, intending to switch the original report with a forgery that predicts low orange crop yields. Beeks uncovers their scheme, and attempts to kill them, but is knocked unconscious by a gorilla being transported on the train. The four disguise Beeks with a gorilla costume and cage him with the real gorilla. The group deliver the forged report to the Dukes in Beeks’ place. After sharing a kiss with Ophelia, Winthorpe travels to New York City with Valentine, carrying with them Coleman’s and Ophelia’s life savings to carry out their plan.

On the commodities trading floor, the Dukes commit their holdings to buying frozen concentrated orange juice futures contracts, legally committing themselves to buying the commodity at a later date. Other traders follow their lead, driving the price up; Valentine and Winthorpe short-sell juice futures contracts at the inflated price. Following the broadcast of the actual crop report and its prediction of a normal harvest, the price of juice futures plummets. Valentine and Winthorpe buy at the lower price from everyone except the Dukes, fulfilling the contracts they had short-sold earlier and turning an immense profit. After the closing bell, Valentine and Winthorpe explain to the Dukes that they made a wager on whether they could get rich and make the Dukes poor at the same time, and Valentine collects $1 from Winthorpe. When the Dukes prove unable to supply the $394 million required to satisfy their margin call, the exchange manager orders their seats sold and their corporate and personal assets confiscated, effectively bankrupting them. Randolph collapses holding his chest and Mortimer shouts at the others, demanding the floor be reopened in a futile plea to recoup their losses. The now-wealthy Valentine, Winthorpe, Ophelia, and Coleman vacation on a tropical beach, while Beeks and the gorilla are loaded onto a ship bound for Africa.

• They’re not just getting rich… They’re getting even.
• Some very funny business.
• Take two complete strangers, make one of them rich the other poor… just watch the fun while they’re… TRADING PLACES

→ According to John Landis, Jamie Lee Curtis was a hard sell to “Paramount,” because she had only done horror films and wasn’t known for comedy.
→ While she was making this movie, Jamie Lee Curtis stayed in Marlene Dietrich’s apartment (12E) at 993 Park Avenue in Manhattan. She’d been engaged to Dietrich’s grandson, production designer J. Michael Riva.

♦ The only thing I’ve got going for me, is this body, this face, and what I got up here. I don’t do drugs. And I don’t have a pimp.
♦ [Ophelia notices Louis watching her undress] By the way, food and rent aren’t the only things around here that cost money. You sleep on the couch.
♦ [reading Louis’ palm] You’ve never done a day’s work in your life.